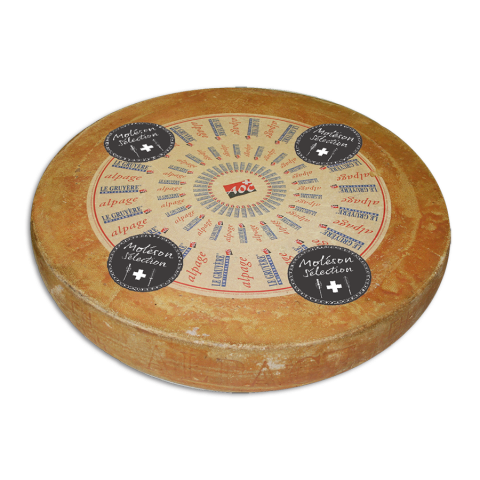 For our Gruyère d’Alpage Moleson Sélection, we selected the Alpage La Bassine alpine pasture, which lies at an altitude of 1261 m. It is in the very heart of the Jura Vaudois nature park, where it’s managed by the Treboux family. It’s here that father and son Maurice and Germain produce the very best Gruyère AOP with the milk from their cows. A great family story! The Treboux family’s dairy herd comprises 74 red or black Holstein Friesians and five beautiful, doe-eyed, brown Jersey cows. All summer long they graze the pastures around the mountain chalet – just pure, fresh, grass, no additives and no silage. Alpine pasture cheese is made from late May through to early September, in other words, while the dairy cows are at pasture in the Alps. Unlike in other alpine pastures in the Fribourg area, in the pastures of the Swiss Jura mountains, the vats of milk are not heated over a wood fire. Instead, water is heated over a wood fire and then this water used to heat the vat of milk. This is why gruyères made in the alpine pastures of the Swiss Jura mountains often have a less pronounced smoky taste.