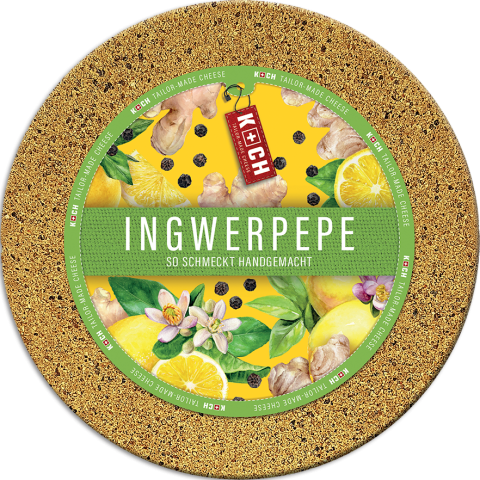 Swiss pressed cheese made from organic raw cow’s milk from the Appenzell region. Produced in a small artisanal cheese dairy according to Kevin’s own recipe, this cheese initially matures 2 months in a natural cellar, after which the rind is covered with a mixture of ginger and decorated with lemon and pepper, before it is left to mature once more for several weeks. The result is a cheese that is initially very spicy, but retains the freshness imparted by the lemon. The Koch cheese dairy is a typical Swiss family dairy from the Appenzell region, who has been making cheese for over 50 years. The current inheritor revamped the dairy by creating flavoured cheeses and original creations. However, the fundamentals remain unchanged and only noble, high quality, organic and locally sourced ingredients are used.