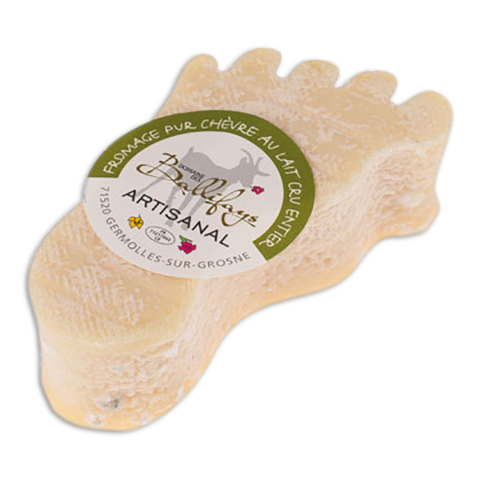 Peton is a great goat milk cheese for a cheese platter, where it will undoubtedly pique your guests’ interest! It is enjoyable for its form, but also its semi-hard texture and its quite pronounced goat flavour. It pairs well with your choice of a white wine or a light red wine. The Peton, in French Baby foot, came from an idea Ralph, cheesemaker at the Domaine des Ballifays, had when he became a father for the first time. To make a cheese in the shape of a little child’s foot. The family developed a special mould made of stainless steel to make the cheese a reality. The Domaine des Ballifays is a small-family owned cheese dairy in the heart of the Charolais hills. Their 150 goats are fed with grain and hay during the winter and graze in he open fields the rest of the year. The goat rawmilk cheeses they produice have unique forms and flavours.