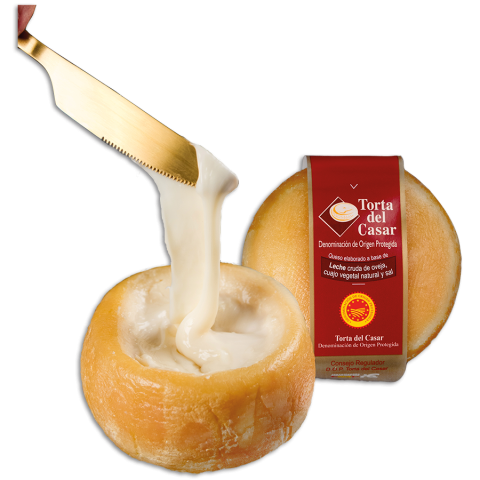 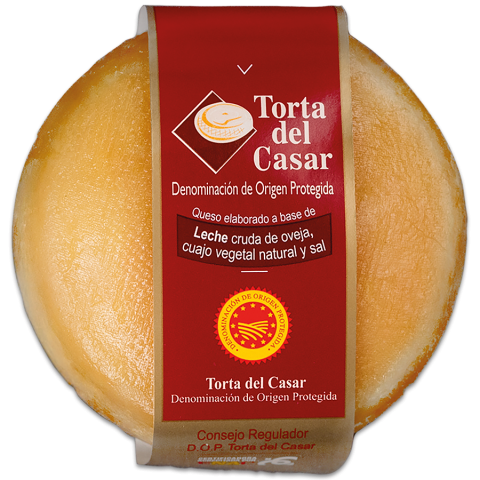 Torta del Casar is a natural cheese, made in the traditional manner from the raw milk of Merino ewes and ripened for over sixty days. The name “Torta del Casar” comes from its shape, which is reminiscent of a round loaf of bread. The vegetable rennet used to make this cheese comes from the wild cardoon or artichoke thistle (Cynara Cardunculus), sometimes called the “cheese rennet-herb”. Originally from the Mediterranean, its bluish flowers are grouped together in flower-heads at the end of long stalks growing up to 2 metres tall. The filaments of these flowers are used to coagulate the milk and separate it into curds and whey. This cheese is characterised by its very creamy, runny texture and its white-to-yellowy paste. As well as having a distinctive aroma and well-developed, intense flavour, this cheese simply melts in the mouth. It’s very slightly salty with a hint of bitterness from the thistle. To fully enjoy a Torta del Casar, bring it to room temperature before serving and slice the top off the cheese with a sharp knife as if you were taking the lid off, then carefully set it aside without breaking it. Use a round-ended knife to spread the cheese on some fresh or lightly toasted bread. When you’ve finished, put the “lid” back on and store in a cool place. In Spain, Torta del Casar is often enjoyed cold with “picos”, crunchy little Spanish breadsticks.